At a time when there are political tensions across Europe, French President Emmanuel Macron has made a huge statement in achieving the approval of an education bill which makes it mandatory for all French schools to fly both the European and French Tricolour flags.  The flags will also state “Freedom, Equality & Fraternity”.

But unlike Macron, some other world leaders have had some unfortunate and even cringe-worthy encounters with their own flags.

Are you familiar with the time the German Chancellor threw away the German flag at a celebration and then very publicly frowned at her colleagues on stage?  If not click on the video below and try not to squirm………….

Unlike many other countries in Europe, outside of sporting events and some public buildings flying the national flag is not as common as you might think in Germany.

The previous UK Prime Minister arrived at a meeting in Paris and her vehicle was displaying the Union Flag upside down which went down like a lead balloon on social media.  Someone had one job! 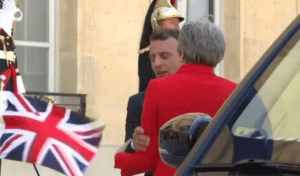 The grand master of faux pas and controversial leadership made our toes curl when he hugged a ceremonial flag, many times over.  This YouTube video sums it all up very well.

If you’ve managed to open your eyes again and are looking for a national flag look no further than our comprehensive range and we’re sure you won’t embarrass yourself like the leaders of the free world.

Flagpoles and flags frequently asked questions How to install a flagpole with a ground screw Flagpoles for your church or place of worship; a guide to repairing, replacing, and installing a flagpole