Flag of the month May – The Union

By Harrison Flagpoles |
Flag of the month | Flags | History |
2 comments

As the nation commemorates 75 years since the end of the World War II we see fit to place the Union as our Flag of the month for May.

VE Day stands for Victory in Europe Day and it was indeed a victorious moment in time. 75 years ago, at 3pm Prime Minister Winston Churchill announced to the nation that the war was finally over. Celebration ensued across the country and it is reported that in London alone a crowd of 50,000 celebrated the momentous event in Piccadilly Circus, cheering and waving flags.

The Union Flag or Union Jack stirs national spirit and has symbolised victory and patriotism for hundreds of years. How glorious it would be to see UK household displaying their Union Flags and bunting on Friday 8th May 2020.

To mark the significance of this flag, we thought we’d share some facts. Maybe you could use them in your next virtual quiz!

So there we are. If you have facts to add, why not pop them in the comments box below.

The current Coronavirus pandemic means sadly we can’t celebrate with parades, concerts and street parties, but we hope however you celebrate this VE Day, this bank holiday, it is a heart-filled and patriotic family occasion. Even better if it includes cake, tea and a little sunshine. 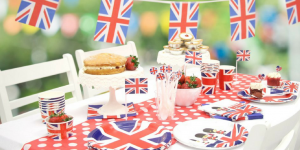 Thinking of adding a flagpole and flag to your home? Why not visit our website to view our range of  garden flagpoles and flags: https://flagpoles.co.uk/flagpoles/flagpoles-and-flags-for-your-home/

Hi, I am a previous customer of your products and will be purchasing more soon. Thank you for what you are doing for the local NHS and the celebrations today of our historic VE day. I hope you all stay safe, look after each other and keep smiling through these tough times.

Thank you for your kind words Garry. Stay safe also.